More Than Money: How Predictive Analytics in Payments Can Help Prevent Human Trafficking 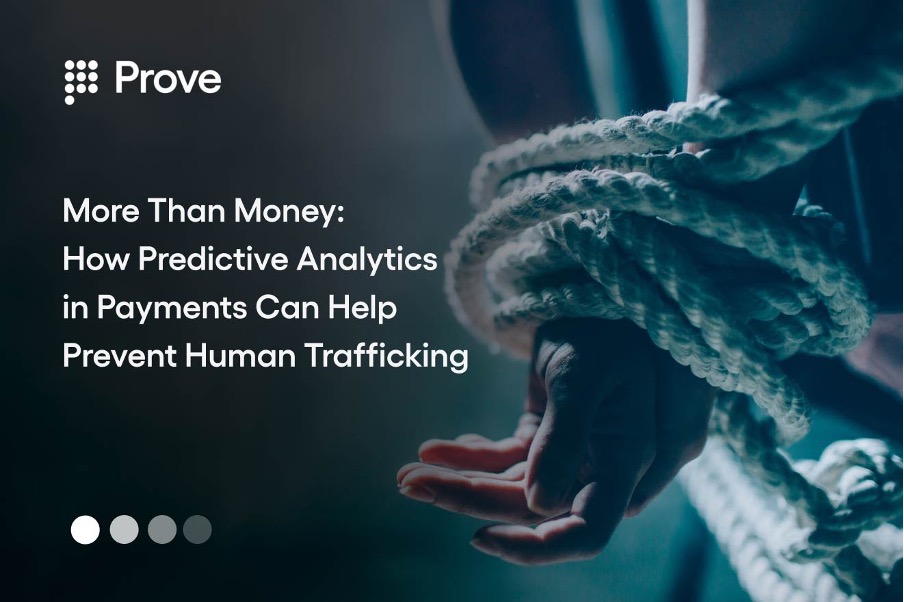 We’ve come a long way in utilizing data analytics and cybersecurity tools to find and prevent payments fraud, an issue we fight daily. However, there is a problem even more nefarious that we, as an industry, could be addressing more fervently with the use of the data we already have at hand: human trafficking.

Human trafficking cases have hit a 13-year record high, according to a UNODC (United Nations Office on Drugs and Crime) report released in 2018. It is estimated that each year, across the globe, 20.9 million people are trafficked for forced labor and sexual exploitation.

While great efforts have been made to bring attention to this issue worldwide, identifying and fighting human trafficking isn’t easy. Technologies such as facial recognition are used to identify trafficked individuals at major airports, but it’s incredibly challenging to acquire a database of images of missing people. However, we can track payments data worldwide. As a 150-billion-dollar “industry,” the perpetrators of trafficking rely on banks and credit unions at each step of their value chains. Whether it takes place as a peer-to-peer money transfer using third-party apps or is completed using cryptocurrencies, a money trail will inevitably be created in the form of data. This could be the game-changer: the data used to identify patterns of suspicious activity possibly related to human trafficking.

How data can help solve the problem

Machine learning (ML) and artificial intelligence (AI) use complex algorithms for pattern recognition. As a result, creating a dataset that trains an algorithm to identify monetary patterns that could point to signs of human trafficking is possible. For example, traffickers may use so-called “funnel” accounts to quickly transfer large sums of money. In this scenario, money is deposited in an account and then quickly withdrawn from another location. Other red flags include purchases on specific classified ad sites and the use of anonymous payment methods rather than personal checks (source: Fortune, July 17, 2018).

Consider, too, that people involved in crimes such as human trafficking do not tend to stay in their “criminal lane,” so to speak. They are most likely also involved in other types of crimes, such as drugs, firearms, tax evasion, theft, coercion, etc. Tracking suspicious data as a whole, including payments, can lead to a tumbling of the criminal world’s house of cards.

So why has it proven so hard to connect the dots and catch traffickers? Because while data is abundant and available, it is often siloed and segregated, making it impossible to make sense of it. It must go through a careful process of creativity, curation, and cleansing before being used appropriately. Secondarily, there are concerns over criminal access to the information: Bad actors would know when such a system has identified their names and/or the names of the persons they are trafficking (the solution to this part of the problem is the utilization of a private blockchain and encryption so that ONLY verified trusted entities can have access).

Thankfully, there already are companies working to solve this data complexity problem. In 2018, Vodafone, BT, Microsoft, Amazon, and Nokia, along with nonprofits and the UN, launched Tech Against Trafficking, a collaborative effort to address forced labor and human trafficking. In 2013, several major banks – including JPMorgan Chase, Citigroup, and Bank of America – launched a human trafficking working group with the Manhattan district attorney’s office to collaborate on the best ways to identify trafficking. In addition, the Blue Campaign, a partnership between the Department of Homeland Security and the Treasury Department’s Financial Crimes Enforcement Network (FinCEN), provides comprehensive instructions on how to detect suspicious financial activity.

These joint efforts appear to be working. In 2015, financial institutions only submitted 400 reports of suspicious transactions related to human trafficking. In 2016 and 2017, they submitted more than 2,000 each year.

We need to take all these efforts a step further: Ultimately, we need to create a global database using machine learning (ML) that genuinely understands the payments data context to solve specific problems related to felonious issues like human trafficking.

Payments data may be our best hope. But, unfortunately, humans are often trafficked in plain sight. They could be working as household staff, toiling away in the kitchens of extravagant homes or local restaurants, or being trafficked for sexual exploitation. But everyone uses some form of currency. It’s time to accept that this is happening right under our noses and start fighting for those who can’t fight for themselves.