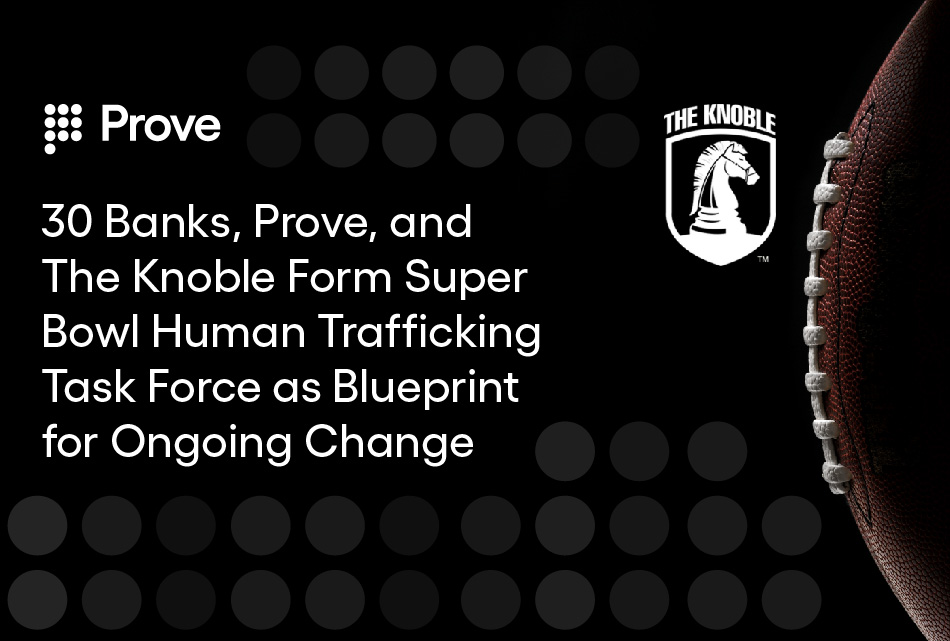 Human trafficking is a grave problem that is causing real people – approximately 25 million women, men, and children worldwide – pain and suffering every single day. All too often, perpetrators fly under the radar, avoiding identification and prosecution due to lack of detection. This leaves them free to continue exploiting innocent people.

To combat this human issue, I’m proud to announce that Prove and non-profit, The Knoble, have formed a task force with thirty banks across the US and law enforcement to create a blueprint for ongoing change demonstrating how financial companies, technology providers, and law enforcement can partner for the ongoing identification and prevention of human trafficking.

Called the Super Bowl Human Trafficking Task Force, the initiative focuses on identifying human traffickers in Los Angeles before, during, and after Super Bowl LVI, which is taking place this Sunday, February 13. This mobilization is already underway, and if we can save even one life, we will consider this effort a success.

As part of the initiative, the task force is implementing specific financial transaction pattern scenarios for identifying human trafficking in Los Angeles ahead of the Super Bowl. As the partnering banks identify these human trafficking detection scenarios, they are filing Suspicious Activity Reports to share intelligence with law enforcement. This will allow for early identification of suspicious activity and eventual prosecution.

But our work won’t be done after the Super Bowl. Once the initial project is over, Prove, The Knoble, and our partners will work together to compile our findings and build a project blueprint that can be reused and scaled for future initiatives.

Prove is extremely honored to be a part of these efforts. As a leader in digital identity, we use our technology to help companies protect their customers against fraud, but we feel that our mission goes far beyond that. By partnering with The Knoble, banks, and law enforcement, we are taking our mission a step further to actively identify and prevent human crimes such as human trafficking that should have no place in our digital or physical worlds.

This is just the beginning.

Learn more about the Super Bowl Human Trafficking Task Force here and if you are a fraud fighter interested in joining the fight, visit theknoble.com for more info.