What Google's E-Money License in EU Means for Banks & FinTechs 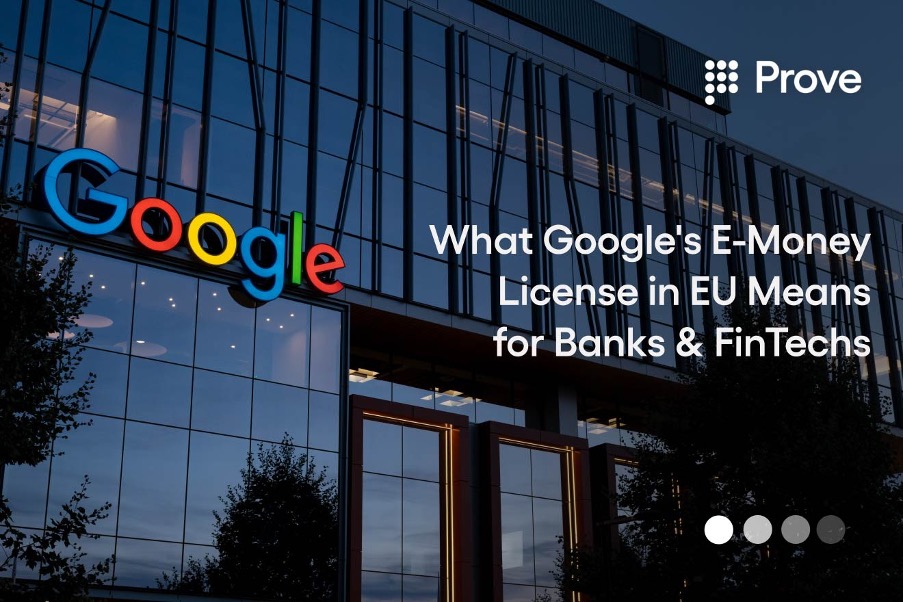 PSD2 and the emergence of new business models in Europe

With effect from January 13, 2018, the EU member states have implemented PSD2 in their national regulations, bringing clear guidelines and national laws to the EU countries which mandate banks – based on customer’s consent – to comply with the demand of opening their APIs and customer data for licensed third-party providers (TPPs), which include:

By introducing new roles, PSD2 fixed the problem with PSD, which could no longer adequately cover players outside of its regulatory framework. Both PISPs and AISPs need customers’ explicit consent before providing them with the service, but a PISP license is slightly more interesting since it enables actionable functionality. AISP is what startups would use to build better budgeting, information aggregator apps, as well as an opportunity to extract insights from one’s financial behavior across other financial apps.

The revised directive served as a foundation for the emergence of the Open Banking initiative led by the Competition and Markets Authority (CMA) in the UK. The underlying idea of Open Banking is to place the consent and choice in the customers’ hands– consent for data sharing and authentication are the pivotal blocks in the Open Banking puzzle. The global Open Banking market is estimated to be worth $9.43 billion by 2020.

Those transformative outcomes are changing the face of banking in Europe, forcing traditional players to differentiate and retain customers’ attention by embracing new business model paradigms – marketplace/distributor/BaaS. PSD2 was meant to facilitate a new wave of innovation, competition, and efficiency, giving consumers more and better choices in the EU retail payment market. And it did – it opened the doors wide for TechFin to push into the financial services industry.

A giant step ahead for the financial services industry and consumers meant technology companies – large and small – were getting a shot at locking consumers in their platforms or ecosystems of products by adding a critical element into an array of functions – financial transactions and, more importantly, access to data about financial behavior.

In 2018, in the UK, 83 firms had been registered or authorized to carry out the activities of AISPs (40) and/or PISPs (43) under the Payment Services Regulations 2017, or are electronic money institutions that have had their authorization varied to allow them to provide these services. With newly minted licenses, regulated TPPs are now using the Open Banking initiative to transform and cement their place in the future of money. Open Banking is paving the way for – not a FinTech, but – a TechFin monopoly. The license is a particularly important deal for encouraging new entrants in the UK, where four banks control 75% of deposits.

“The business of banking is changing, and it is changing dramatically. Disruptive technologies are increasingly being placed in the hands of end customers, and their behaviors are changing. And as their behaviors change, the business of banking is changing, so banks no longer own the end-to-end value chain. A non-bank service provider can now provide every piece of what we do. We read an awful lot in the media about the unbundling of the financial services, and how banking is becoming more modular.” – Kevin Hanley, Head of Innovation at RBS

Google – The ultimate opportunist in payments

One of the recent and particularly interesting companies to get a license is Google. At the end of 2018, Google obtained an e-money license in Lithuania, joining a growing number of technology companies that have secured permission to offer financial services across the European Union (Facebook obtained its license in 2016 in Ireland, Amazon Pay obtained an e-money license in Luxembourg). Currently, Google Pay allows customers to store card details in a digital wallet that is used to make purchases online or in an app, as well as use mobile phones as payment devices in a store. The license adds the ability to process payments, issue e-money, and handle electronic money wallets.

But this particular license is just another affirming piece of a more interesting story about how persistent and serious the tech giant is about shaping the future of money around the world and how it aims to do it.

Google is a stronghold of data like no other. In 20 years of its existence, the company has built an ecosystem of products for everyone – consumers, businesses, and developers – to lock every actor in its diverse world of hyper-connected solutions.

With its suite of 116 solutions, Google is the ultimate opportunist that doesn’t spare any resources to grab a chance at market dominance the moment it sees one. Its e-money license in Lithuania is not the first experience with payments. The company is building a global payments leader, bringing all its payments offspring under the umbrella of Google Pay (Android Pay, Google Wallet, Google Tez – all Google Pay now). Since the launch of Tez in September 2017, over 22 million people and businesses have used Tez (now Google Pay) to make over 750 million transactions that are collectively worth over $30 billion annually.

What exactly does the e-money license allow Google Pay to do?

The e-money license, while not a full-fledged banking license, is still is a powerful enabler for technology companies in the EU.

The newly acquired license in Lithuania doesn’t allow Google to offer a full array of banking services, namely deposit accounts, loans, or mortgages. It’s debatable whether Google needs to offer all services everywhere at the moment. Google is aiming at the whole EU with its payments service, disintermediating other actors.

Google Pay operates in 28 countries across the Americas, EMEA, and APAC. Out of the 28 EU nations, Google Pay was present in 14 of them: Belgium, Croatia, Czech Republic, Denmark, Finland, France, Germany, Ireland, Italy, Poland, Slovakia, Spain, Sweden, and the United Kingdom. The e-money license in Lithuania allows Google to push for becoming the dominating EU-wide payments service provider. In the UK, for example, Google Pay already supports 27 banks (for comparison, in the US – 1,806), and many more across the remaining 13 countries.

In India, Google Pay supports payments with some 2,000 apps and websites. There is another reason Google’s aggressive push in India is indicative for the world – in August 2018, amid the fight for a $1 trillion digital finance market, Google partnered with four Indian banks to grant consumer loans online. Google teamed up with HDFC, ICICI Bank, Kotak Mahindra Bank, and Federal Bank to offer instant, pre-approved loans to customers right within Google Pay in a matter of seconds, the company claimed. Bloomberg reported that over 55 million people in over 300,000 towns and villages have downloaded (now) Google Pay to pay for bus rides, split dinner bills with friends or pay repairers, amounting to $30 billion in annual transactions. Credit Suisse estimates that the Indian digital payments market will touch $1 trillion by 2023 from about $200 billion in 2018.

The scaling opportunity in Asia & the EU is not the most or the only interesting part yet – it’s the monopolization of consumers’ lives. Despite the continuous struggle in competitive markets like the US, Google doesn’t shy away from investing resources in building solutions to address a specter of one’s daily needs. All along, Google has been plotting to turn Google Pay into an all-encompassing payment app for the EU and other markets.

The EU-wide e-money license is left for Google to drive the customer relationships away from the banks. The license is the chance to turn collaborative relationships into a strong competition. Over the years of investments into Google Pay, data accumulation, and development of domain expertise, Google built a foundation for its tight ecosystem of solutions to lock users in completely – the user can access all accounts through all Google products without ever going to a bank.

There is no necessity to go over all 116 products in Google’s ecosystem to understand how deep Google is embedding itself in our personal and professional lives. It is enough to think of examples such as Google Assistant, Google Flights, Connected Home, Google Merchant Center (+ retail solutions), Google My Business, Hire by Google, Project Fi, Google for Education, etc. There is very little room in Google’s world for any other parties. The ability to perform financial operations with Google is the sound of the door shutting behind the user once s/he steps into that world.

The EU-wide e-money license is the inflection point where Google declares itself a competitor to banks, startups, and other tech giants across the European nations. Google no longer has to rely on relationships with institutions to get to customers. With the knowledge the company has accumulated about billions of people, their online & offline behavior, and expertise in what constitutes a superior CX/UX/UI, Google only has one party to impress – the end user.

Google’s data leverage will eventually lead to a data-driven monopoly, which will make it difficult for other players – banks and startups – to compete with them. With the high information density of this data and a plethora of touchpoints throughout its vast ecosystem of products, Google will not just read through consumers’ financial lives; it will be well-armed to lock them in the comfortable, hyper-connected all-functional world of Google. In fact, any of the massive tech players getting to such a data monopoly stage will be ready to dominate the financial services stage. However, sometimes down the line, banks who adapt to the situation by tweaking their business models and serving as providers of banking service modules will go a long way.