What Is Reusable Identity? 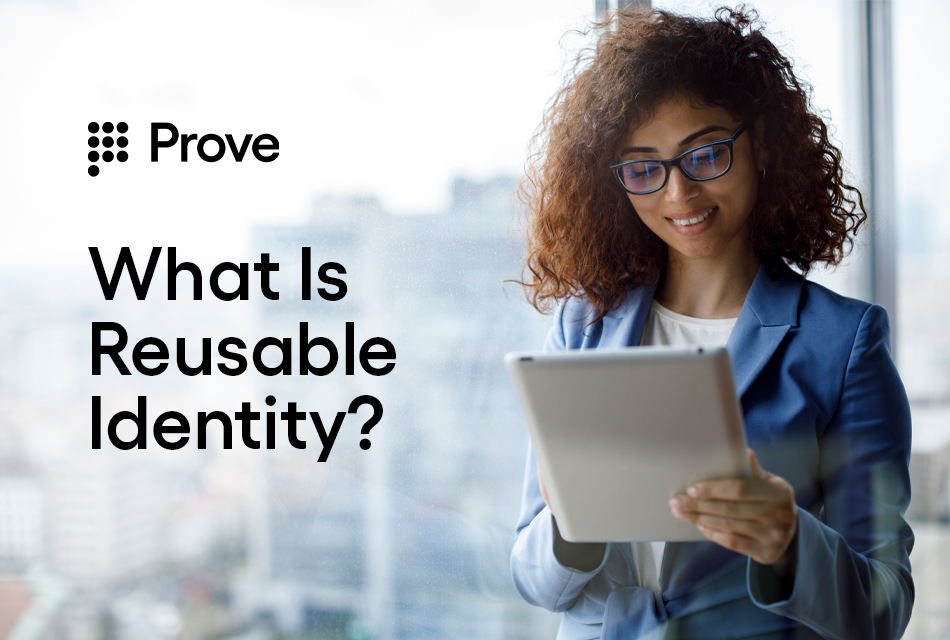 Reusable identity is quickly becoming a buzzy term in the identity market, but what do companies need to know to stay current with this major evolution in digital identity? In the latest Prove Identity Report, where we deliver actionable insights for identity and fraud executives, I tackled this question with Tim Brown, Prove’s Head of Product and a well-respected identity authentication expert who holds multiple patents in authentication biometric liveness and identity acquisition.

Read the following executive summary and scroll to the bottom for the full video.

(The following interview has been edited for clarity and brevity)

What is reusable identity?

Tim: At its core, reusable identity is a form of identity establishment that is defined by its portability, interoperability, consistency, and consumer control.

Tim: Establishing identity, be it for your bank app, your ride-share account, your grocery delivery website, etc., is not always the most consumer-centric, friction-free experience that it could be. Sometimes you are asked where you lived when you were 6 years old and the color shoes you liked to wear all the time, while other times you have to capture your driver’s license and a selfie, proving that you aren’t wearing a mask and are alive (so-called liveness).

How do the major components of reusable identity that you listed earlier solve for the limitations of current identity establishment methods?

Portability: As a consumer, I spent some time proving my identity. Why can’t I use that over and over again? It seems like a no-brainer, but the market has typically thought of identity in a silo. How does identity pertain to me, the app provider? Reusable identity takes that notion and turns it on its head and instead asks, how can the consumer take that identity to multiple apps and websites.

Interoperability is closely related to portability. It’s one thing to claim my identity portable, but the larger question is how it interacts with a common language to ensure that I can reuse it. Does the identity rely on a standard or a common set of rules? Much like we see so-called “social logins” that rely on technology like OpenID Connect to ensure interoperability, reusable credentials need to rely on similar means to ensure integration ease for the company asking you to prove your identity,  as well as a common set of guidelines to ensure a consistent and pleasurable experience for the consumer.

Consistency: This impacts both the consumer and the company requesting the identity. First, the consumer understands the credential; they’ve created the identity once, are comfortable with it, and experience a common interaction when they use it, regardless of which app or website they are interacting with. Typically it’s branded so the consumer can trust that they aren’t being scammed, phished, etc. The company consuming the identity can rely on a common language of identity assurance that translates into a measurable trust. Additionally, the company doesn’t have to be an expert in identity to integrate it - they can simply ask, “how trustworthy is this identity?” and the response is a measurable attribute.

Consumer control:  A key to reusable identity is the notion that consumers have agency over the types of data shared with relying parties asking for consumer identity. For example, If I want only to share that I’m over 21 to an alcohol delivery service, I should be able to do just that and nothing more. And the service should trust that that information is being asserted from a strongly proofed identity credential.

Tim: There’s no doubt that reusable identities are becoming increasingly important as there are a growing number of compelling use cases hitting the market. We see them taking on many forms suiting many different markets. Off the top of my head, I could point to civilian ID programs like mobile driver’s licenses and soon-to-be-released true mobile passports to reusable credentials driving access to government services. Commercial usage is on the uptick as well, especially abroad. Programs like the Swedish BankID, AADHAR in India (a government program being used for commercial services like banking), and Estonia eID (another government program with mixed-use) are making a splash. There is also a huge land grab happening in decentralized identity and verified credentials. Companies are enabling so-called self-sovereign identities in novel ways like enterprise password reset and remote employee onboarding.

Finally, how is Prove leading the shift to reusable identity? What do we have that many other identity verification and authentication providers do not?

Prove is leading the shift to reusable identity through our foundational Prove Identity Network - what we refer to as PIN. PIN is our platform that issues and maintains the most accurate digital tokens for consumer identities and is designed to thwart the six major categories of identity fraud, including synthetic identities and true name fraud.

With PIN, Prove has created a network of reusable and durable identities unlike anything else in the industry. Given the extraordinary transactional access provided to Prove across all channels and keys, we are uniquely positioned to operate as a real time, high-trust identity agency. We leverage our advanced machine learning techniques to drive the highest possible success with the lowest possible fraud. Our goal is to have more than 3 billion reusable identities by the end of 2024!

For more insights on reusable identity, watch the full video below.