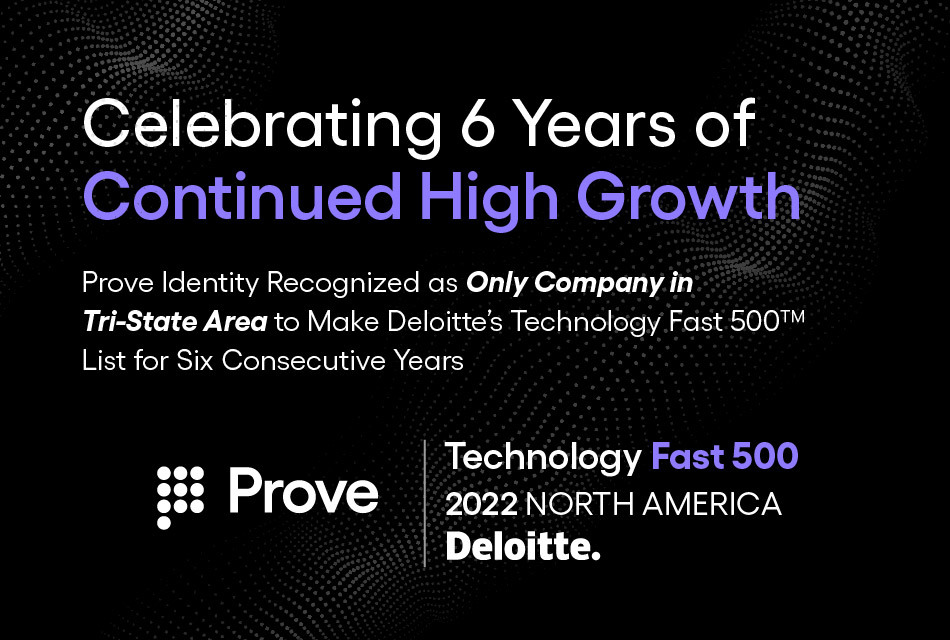 The digital identity leader’s sustained growth was recognized by Deloitte’s prestigious list of the fastest-growing companies in North America. Prove is one of only 14 companies that made the list six consecutive times nationally.

NEW YORK, November 16, 2022— Prove Identity, Inc. (“Prove”), the leader in digital identity, today announced it has been named to Deloitte’s Technology Fast 500™, a ranking of the 500 fastest-growing technology, media, telecommunications, life sciences, fintech, and energy tech companies in North America, for the sixth year in a row. Prove is one of only 14 companies on the 2022 list to have made the list six times or more and is the only company in the tri-state region that has made the list six consecutive times.

"Identity is the key to winning in digital,” said Desai. “It’s been exciting to see so many global businesses adopting Prove’s identity solutions to modernize their digital experiences, which in turn is helping them to win hearts, minds, and market share.”

In addition to its explosive revenue growth, Prove has continued its global expansion with a recent launch in Brazil, and its industry expansion with its first customer in the gaming vertical. Prove has also taken home recent awards and recognitions including CB Insights’ Fintech 250 award, Expert Insights’ Best Multi-Factor Authentication and Best Biometrics awards, the Financial Times’ Fastest Growing Companies award, Comparably awards for Best Compensation, Best Benefits, and Happiest Employees, and Davey and Muse Creative awards for Best Rebrand and Best Corporate Identity. Prove’s CEO Rodger Desai was also named to Amplitude’s Product 50 list of the world’s 50 most influential product leaders in 2022.

As the world moves to a mobile-first economy, businesses need to modernize how they acquire, engage with and enable consumers. Prove’s phone-centric identity tokenization and passive cryptographic authentication solutions reduce friction, enhance security and privacy across all digital channels, and accelerate revenues while reducing operating expenses and fraud losses. Over 1,000 enterprise customers use Prove’s platform to process 20 billion customer requests annually across industries, including banking, lending, healthcare, gaming, crypto, e-commerce, marketplaces, and payments. For the latest updates from Prove, follow us on LinkedIn.

Now in its 2year, the Deloitte Technology Fast 500 provides a ranking of the fastest-growing technology, media, telecommunications, life sciences, fintech, and energy tech companies — both public and private — in North America. Technology Fast 500 award winners are selected based on percentage fiscal year revenue growth from 2018 to 2021.